Bitcoin, the world’s first cryptocurrency, is something of a trailblazer. Some would argue that Bitcoin has the potential to completely change the way the world views money - so if you want to become an expert on cryptocurrency, getting your head around Bitcoin is a good place to start.

When and how was Bitcoin created?

In 2008, a mysterious person, or group of people, under the pseudonym Satoshi Nakamoto released a paper online introducing the idea of an electronic, peer-to-peer cash system. The idea was pretty innovative and the paper gained a lot of attention in the cryptography community (cryptographers are a special type of tech geek interested in encrypting sensitive information).

Then, in January 2009, Bitcoin came into being when Satoshi Nakamoto mined the first block of Bitcoin. It didn’t require stamping plants or hydraulics to mine Bitcoin, however – Bitcoins are ‘mined’ via the internet by solving complex mathematical problems.

The reward for mining the first block was 50 Bitcoins (which wouldn’t have been worth much at the time) and it’s said that Satoshi proceeded to mine a total of 1 million Bitcoins within a year.

1 million Bitcoins? How many are available in total?

Unlike traditional currencies, but very much like gold, Bitcoin has a finite supply - it is capped at 21 million Bitcoins. The reward for mining a block, a feat which occurs roughly every 10 minutes, also decreases as we get closer to reaching the 21 million cap.

The current reward is 12.5 Bitcoins, but this reward will periodically halve in value over the next several decades. In 2020, the reward will be 6.25 Bitcoins.

This process will continue until around 2140, when it’s estimated that the last Bitcoin will be mined.

A Bitcoin isn’t a physical thing that you can carry around with you, it’s simply a number. Most people store their Bitcoins in a Bitcoin wallet.

A Bitcoin wallet isn’t the same as a normal wallet. It’s a software program that contains one or multiple ‘private keys’, which are used to access Bitcoin addresses where balances are stored.

Simply put; your unique private key proves that a certain amount of Bitcoin belongs to you - and, if you lose this private key, there’s no way to get it back!

Who is using Bitcoin?

In short; lots of different people.

Not just software nerds either, but everyday consumers from all walks of life.

Some people trade Bitcoins to take advantage of the market volatility. Others are actively using Bitcoins to buy goods and services as a growing number of retailers and merchants accept them.

They’re also becoming increasingly popular in countries with a lot of political uncertainty. In Venezuela, for example, more people are turning to Bitcoin to afford basic goods in times of hyperinflation. In Catalonia, there is talk of implementing a national cryptocurrency should the region achieve independence from Spain.

We’ll learn more about how cryptocurrency is changing the world in a later lesson, but, to give you an idea of the scale of cryptocurrency adoption, research by Cambridge University in 2017 found that between 2.9 to 5.8 million people are using a cryptocurrency wallet, with most of them predominantly containing Bitcoin.

The reality is that this number is only set to grow.

Bitcoin vs. the world?

Bitcoin is extremely volatile, which many see as an opportunity - while others see that volatility as a major risk. Bitcoin has certainly had its detractors, particularly from those in banking and government, whose whole spheres are at threat from disruption brought on by Bitcoin.

It also does face some stiff competition from many emerging cryptocurrencies. Ether, the cryptocurrency powered by the Ethereum blockchain, looks like it may become Bitcoin’s biggest rival. We’ll cover Ethereum later in this module.

The future does look bright for Bitcoin though. It’s still the best-known cryptocurrency in the world – and the most valuable! 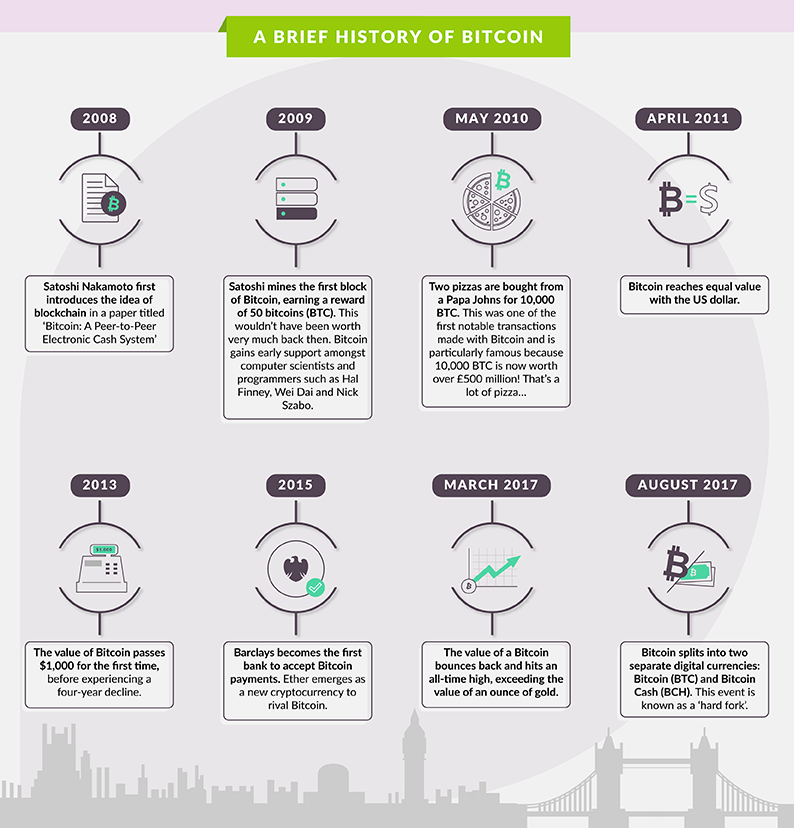