Ethereum isn’t a cryptocurrency – it’s the name of the network that is powered by Ether (ETH), which is itself the world’s second largest cryptocurrency by market cap after Bitcoin.

So, while Bitcoin uses the Bitcoin blockchain to process value transactions, Ether is the cryptocurrency of the Ethereum blockchain which provides the computing power to run any decentralised application that’s built on top of it.

What’s a decentralised application? Simply put, it’s an application without any middlemen needed to manage the processing of information - no single party is in direct control of it.

Instead, it’s all handled using blockchain.

Ethereum, which was proposed by Vitalik Buterin in 2013 and went live in 2015, allows users to create their own currency tokens and was the first to bring the concept of decentralised applications to the forefront of blockchain development and proposition. Where other blockchains are designed for specific tasks, like Bitcoin, this one has no such restrictions - developers can build whatever they like through the Ethereum Virtual Machine (EVM).

This lack of restriction there’s no need to build new blockchains for every application.

Every operation that takes place on the Ethereum network costs a certain amount of ‘gas’ – a special unit that acts as a certain quantity of cryptocurrency. The more effort a task takes, the more ‘gas’ it costs.

This is all a pretty complex concept to get to grips with, so we’ll explain this in more depth in a later lesson.

The cryptocurrency component of Ethereum is called ‘Ether’. It’s been around since 2015, but 2017 saw a major surge in its popularity. It can be used to buy and sell services on the Ethereum network and can be traded at many cryptocurrency exchanges – most of which will offer wallets that can store it online.

Perhaps the most interesting thing about Ether is that it’s theoretically unlimited. Where other currencies have hard limits built into the network, there is – as of yet – no cap on the number of Ether that can be produced.

Ethereum and Bitcoin are similar in some respects, but have several key differences. The most significant are:

• No limits on Ether in circulation - There is currently no limit on the number of Ether that will be created, although this may change in the future.

• An open source network to build and deploy any decentralised application. It’s a developer’s playground and is built as a ‘general purpose’ blockchain.

• A cooler name. Seriously. Say it out loud! Doesn’t it make you want some?

The possibilities of Ethereum

Ethereum offers much of the functionality associated with Bitcoin: the cryptographic security, the freedom from individual interference, the permanent and indelible record of the blockchain and more.

We’ve been over the lack of a hard limit on Ether and the ability to build thousands of different applications. Ethereum is rising rapidly and its future is brighter than ever. It offers possibilities and innovations that elude Bitcoin – and may one day come to eclipse it. 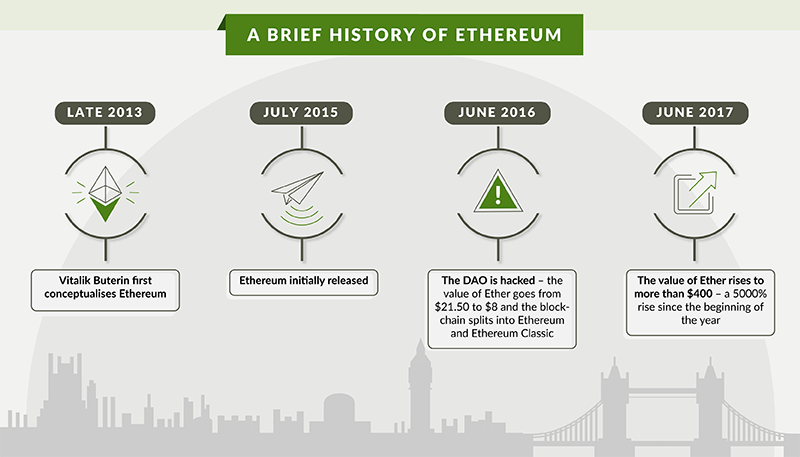