Cryptocurrencies are getting a lot of attention, but there’s just as much buzz around blockchain.

There’s a very good reason for this - cryptocurrency and blockchain are an essential duo. If the former is the good-looking, attention-grabbing lead singer; the latter is the musical prodigy who writes the songs and experiments with new ideas.

So, what is blockchain – and why does it matter?

The blockchain is a decentralised peer-to-peer ledger comprised of a series of continually updated, timestamped and cryptographically secured digital records.

Okay. What does that mean?

Blockchain is a database that allows the parties on either side of a transaction to connect directly without the need for a middleman or third party. The transactions are secured via mathematical codes (cryptography).

The blockchain is basically a network (or chain) of computers (or nodes) that contains a decentralised database of transactions that can be seen by everyone on the network (known as a digital ledger).

Every blockchain transaction is approved, verified and recorded on this digital ledger, but private details are scrambled in such a way that only the relevant parties can understand them.

This means that it’s very difficult to conduct fraudulent transactions, as you would have to make sure your transaction is added to the ledger successfully and accepted by all the computers in the chain.

Unlike the traditional financial system, nobody ‘owns’ the records, so nobody can interfere with them.

Blockchain ensures security, accountability, transparency and efficiency – all without interference from banks or governments. This is why it’s such a big deal.

But what does blockchain have to do with cryptocurrency?

Without blockchain, cryptocurrencies like Bitcoin wouldn’t exist. As a decentralised ledger, it allows every Bitcoin – or piece of Bitcoin – to be stored as an individual item attached to a unique ‘address’. Each address serves as an anonymised cryptographically secured key that shares some similarities with a conventional bank account.

Coins can’t be duplicated and records can’t be manipulated. It’s no wonder then that cryptocurrencies have earned a reputation for security and transparency – and it’s all because of blockchain.

So, what else does blockchain do?

The technology confers many different advantages and is being applied in various contexts, including cyber security, charity, cloud computing, video gaming, supply chain management and intellectual property, such as music and entertainment.

Simply put, there are very few industries in which this technology can’t make a difference. If cryptocurrency is going to revolutionise money, blockchain could well revolutionise everything.

Blockchain is a complex, revolutionary machine connecting to the whole world – and there are many different cogs and gears that go into making it work. We’ll learn about them later, but, for now, that’s blockchain explained as simply as possible! 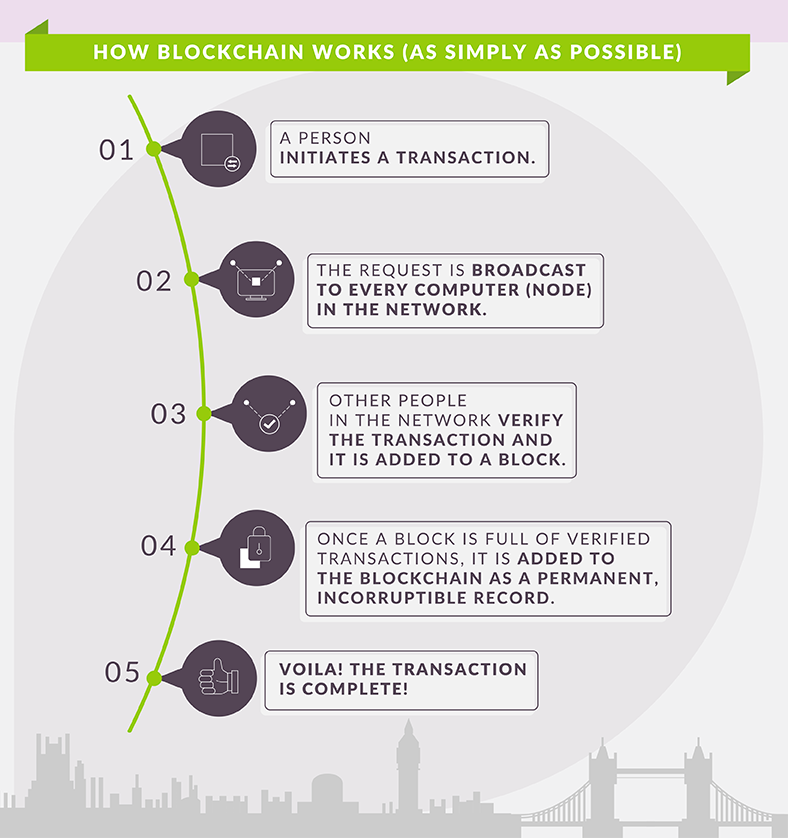