In our first lesson, ‘Cryptocurrency Explained’, we discussed how cryptocurrency blockchains help to provide transactional anonymity. Remember that there are over 1000 cryptocurrencies available though and the degree of privacy does in fact vary from one to the next.

Monero’s claim to cryptocurrency fame is that it facilitates some of the most secure, private and untraceable transactions compared to many of its counterparts.

How does Monero compare to Bitcoin?

Bitcoin is the world’s first decentralised digital currency and is still the most well-known. If you’d like to review the ins and outs of Bitcoin, refer back to our prior lesson.

Like Bitcoin, Monero enables a direct digital exchange of value between person A and person B. The transaction is made without having to go through a third-party like a bank or government. This gives you, the user, complete control over your funds and full responsibility for how you spend your digital coins.

Unlike Bitcoin, however, Monero is completely private.

It may surprise you to learn that Bitcoin is not entirely anonymous - it’s pseudonymous. In other words, it allows users to transact under an alias and keep their real names a secret.

The problem lies with the fact that your pseudonym is basically your Bitcoin address. Every transaction you make using your alias is linked to your address and stored forever in the blockchain.

So, whatever you buy and sell using Bitcoin can eventually be traced back to you.

Many within the Bitcoin community didn’t like this level of exposure and wanted a more privacy-oriented coin, therefore, in April 2014, Monero (XMR) was released. It’s built on the Cryptonote protocol, which provides a high level of privacy.

How it does this isn’t all that easy to explain – but we’ll do our best!

What makes Monero so secure?

In short, Monero uses cryptography algorithms known as ‘ring signatures’ and ‘stealth addresses’ to muddle up each transaction’s value, origin, and destination and obscure the sender’s and recipient’s identities.

A stealth address is a one-time address created on behalf of the recipient for each transaction.

A ring signature is a mix of the user’s account keys with public keys pulled off the Monero blockchain. This creates a ring of possible signatories, making it impossible to link a specific transaction with a specific user.

However, it’s not all ‘cloak and dagger’; Monero users can also choose to share their information selectively with certain people.

Well, apart from the obvious peace-of-mind, Monero’s enhanced privacy makes the cryptocurrency ‘fungible’. This means that each individual unit of currency can be substituted for another - or, if we put it another way, every coin has an objectively equal value.

Fungibility is important because it means that the value of each Monero unit is secure. The value of Bitcoins, for example, can be compromised because the transactions are traceable. If certain units of Bitcoin are associated with illegal or illicit activities, such as purchasing drugs, then their value can drop as that particular unit becomes undesirable.

Since Monero transactions are untraceable, they cannot be associated with ‘dirty’ deals – ensuring a stable unit value. These unique qualities of privacy and fungibility have contributed massively to Monero’s steady increase in popularity and use.

What if you’re a miner?

Another difference between Bitcoin and Monero is that the latter offers miners a ‘permanent block reward’. By comparison, with each block of Bitcoin that is mined, the reward drops. Furthermore, there is a cap of 21 million Bitcoins, while miners can create Monero indefinitely.

Where can you get Monero?

Given the growing demand for Monero, it’s becoming more readily available. It can be bought using several different cryptocurrency exchanges, such as GDAX or Kraken. 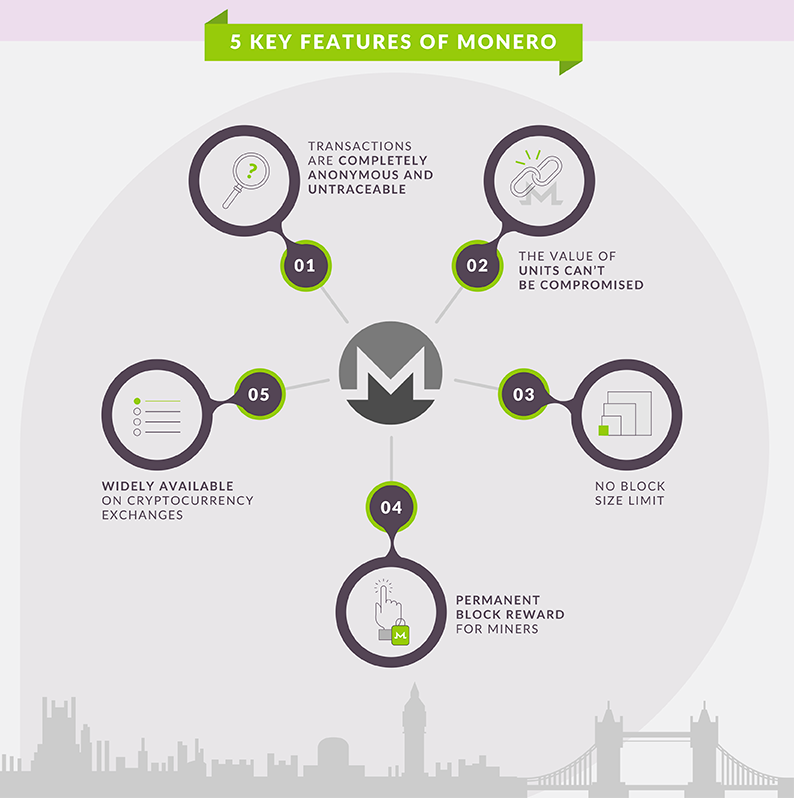