Launched in 2012, Ripple is a cryptocurrency that tears up many of the rules that define cryptocurrencies. In fact, some would argue that it’s not a true ‘cryptocurrency’ at all.

So, what is Ripple – and why does it matter?

Bitcoin was designed to launch alternative systems of currency and payment processing. It proliferates through mining and it’s completely independent from centralised institutions.

Created by a computer software company of the same name, Ripple works as a decentralised payment network – but one that largely works to enhance traditional financial systems.

Its cryptocurrency unit is called ‘XRP’, but the cryptocurrency is just a means to an end to bring speed, transparency and security to conventional financial processes. You will find no lofty talk of ‘reinventing money’ here.

Consequently, it’s received some criticism from decentralisation diehards, who call it a ‘fake cryptocurrency’ – amongst other, more profane things.

Around 100 billion XRP were created at Ripple’s inception, 60% of which are still owned by the company. Every time a transaction occurs, a few of these are destroyed. It can’t be mined either, so the only way to obtain it is through a cryptocurrency exchange.

Why does it matter?

Ripple’s earned a reputation as one of the best ‘altcoins’ available - and for good reason. At under $1 per unit it’s worth a lot less than Bitcoin, but there’s much, much more of it (100 billion to Bitcoin’s 21 million).

This speed has made it attractive to banks and financial institutions, who have been actively (if gingerly) exploring the benefits of blockchain technology for some time.

But don’t worry! Individuals can buy it from any exchange that offers it, so you don’t have to be HSBC or Morgan Stanley to benefit.

The future of Ripple

What lies in store for Ripple?

Well, in terms of cryptocurrencies, it’s comfortably within the top five worldwide – behind Bitcoin, Ethereum and Bitcoin Cash, but ahead of Litecoin. In terms of its ambition to transform financial systems, its full impact is yet to be felt. 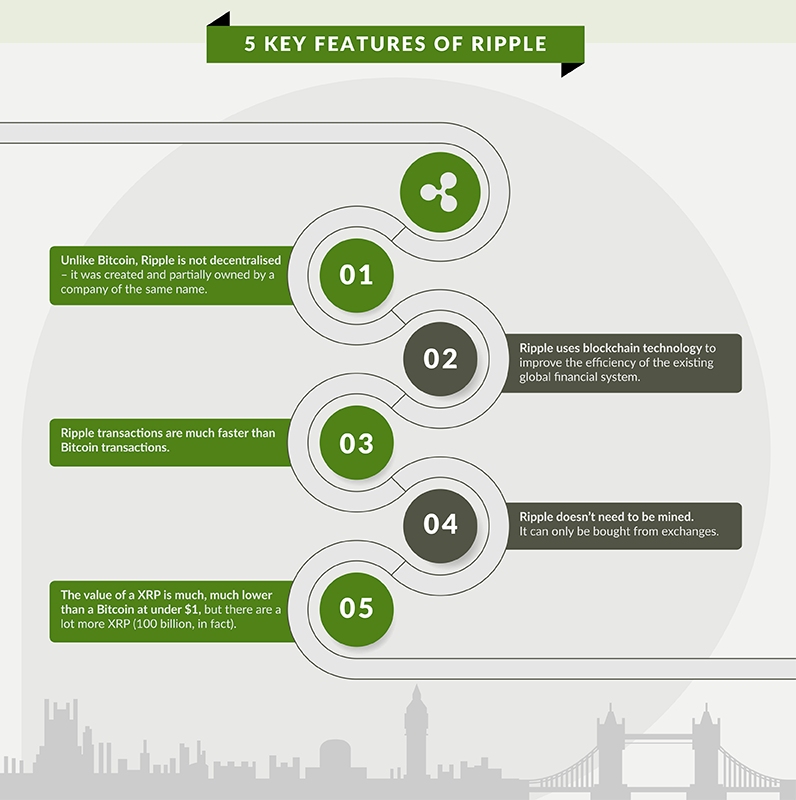